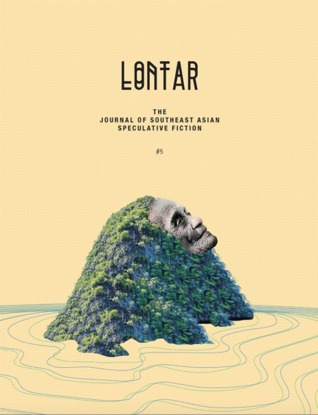 This issue of LONTAR presents speculative writing from and about Singapore, the Philippines, Malaysia, Cambodia, Indonesia and Thailand.

No Man Is
Ng Yi-Sheng

Here we’re brought up to call a spade a freak with such backhand ease. His name is Marl, and he sat at the back of class trying for the cool pallor of indifference, but his little-boy heart was breaking.

Your father is a lion! Your mother is a fish! we used to chant riotously behind him, before him, beside him.

Already he’d looked so different, so alien-esque—his pale skin a sick shade of grey, always covered with a light film of sweat, large eyes, jagged milk teeth strangely juxtaposed with lips too full for a boy, lips he pulled at like a catapult when he was nervous—but we’d laid off him because he was quiet. We ribbed him discreetly amongst ourselves but we never laid a finger on him, until he blurted out once: My mother is a mermaid.

And then we were light-headed with relief because now he’d done it, given us a reason. Which self-respecting boy would say something like that? He deserved our ridicule, and we gave it to him in full force. We laughed boorishly. We drew pictures of his mother with breasts, seashells on her nipples. We drew pictures of what we imagined copulation between a boy and a mermaid would look like. We were graphic when it came to imagining where they would stick it in.

At some point, one of these drawings surfaced to a teacher. Marl wasn’t the one who’d turned it in, we knew this, for between all boys—even the bullying and the bullied—there is a code of honour that is seldom transgressed.

We were called in for questioning. She gave each of us three light raps across the knuckles, with a wooden ruler. Marl’s only making things up because he lost his mother, the teacher said, We should be ashamed of ourselves. None of us were. We were itching to get at him—someone had to take the discontent of our being ratted on, what more convenient a scapegoat than a victim?

The good intentions of the teacher were completely flushed away by the time we were done with his head in the toilet bowl. At the end of it, we called him a liar, an orphan.

To which he said, No, I have a father.

Of course we remembered—we’d seen his father once, waiting for him by the school gate. He looked like a rangy beast, with a head of coarse and curly long hair, and a face obscured by whiskers and stubble. Lionhead, said one of us in a hoarse whisper as we crept past the school gate, and it stuck.