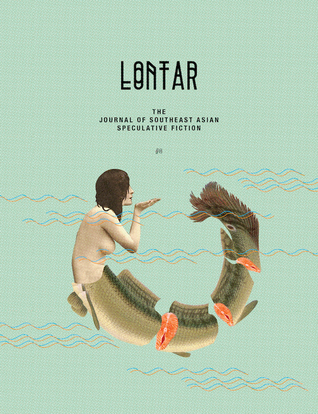 This issue of LONTAR presents speculative writing from and about Singapore, the Philippines and Thailand.

Also included is a special supplement: part one of Dean Francis Alfar’s brilliant novel Salamanca, winner of the Palanca Award Grand Prize for the Novel and the Gintong Aklat Award for Literature, serialised here for the first time anywhere.

Extract from “The Fisher Queen”

My mother was a fish. That’s why I can swim so well, according to my father, who is a plain fisherman with a fisherman’s plain logic, but uncanny flair for the dramatic. And while it’s true that I can cut through the water like a minnow, or a hand dipped over the edge of a speedboat, I personally think it’s because no one can grow up along the Mekong without learning two things: how to swim, and how to avoid the mermaids.

Mermaids, like my father’s favourite storytale version of my mother, are fish. They aren’t people. They are stupid like fish, they eat your garbage like fish, they sell on the open market like fish. Keep your kids out of the water, keep your trash locked up, and if they come close to land, scream a lot and bang pots together until they startle away. They’re pretty basic.

My sisters tried to talk to a mermaid once. It was caught up in one of Dad’s trammel nets, and when they went to check the net out back behind the house, they found this mermaid tangled in it. It was a freshwater one, a bottom-feeder, with long, sparse hair whose colour my sisters still argue about to this day. Iris, the oldest, felt bad for it and made May splash some water on its fluttery gills with her red plastic pail. She asked the mermaid if it was okay, what its name was. But it just stared at her with its stupid sideways fish eyes, mouth gaping open and closed with mud trickling out over its whiskers. Then Dad came home and yelled at Iris and May for bringing in the nets too early and touching the mermaid, which probably had sea lice and all kinds of other diseases.

I was just a kid then, but my sisters tell that story all the time. Iris is a marine biologist wannabe, almost done with high school but too dumb to go to university, who lectures us on fishes like we haven’t been around them our whole lives. She sleeps with the biology textbook I stole from the senior honour kids’ classroom under her pillow. May doesn’t give a shit about school and will probably get married to one of the boys living along the dock so she doesn’t have to repeat tenth grade again. The mermaid is one of those shared childhood memories they have, a little spark of magic from a time when they still believed that our mom really was a fish and maybe that mermaid was a cousin or something.

But I’m fifteen now, a full-fledged deckhand on a trawler, and too old to be duped by some story Dad made up so he wouldn’t have to explain why our very human mom took off and dumped the three of us with him. I don’t care about stories of kids touching a glorified catfish either. It actually makes me sad, to think that my sisters really believed that our mom could be a dumb animal like that mermaid.